Stonex India’s administrative and industrial complex in Kishangarh has been conceptualized to serve as an eminent landmark in Kishangarh. Instead of erecting a factory-processed industrial shed that focuses on the product and does not communicate with the people who inhabit it, the Stonex factory is developed as a native production-house, geared for excellence and innovation of the global order, while successfully carving out a niche of its own amidst the industrial landscape.

Production: The Industrial Shed
Adhering to exigencies of site and logistically sound planning, the manufacturing block orients rather unconventionally in the East-West direction. The finished product of the factory demands uniform lighting throughout the day, with no exposure to direct sunlight. Hence, the orientation is strategically exploited by incorporating complementary systems: North light trusses are introduced to penetrate the complete volume, sloping at a suitable angle of 23 degrees towards the south, providing for ample surface for photovoltaic panels and the resulting solar roof of almost 1MW (sufficient enough to fulfill the power requirements of the factory). Long concrete gutters have been planned to avoid water leakage and facilitate maintenance instead.

Functionality drives the design; the linear production process is used as a design determinant to avoid the workers being forced to do manual lifting, prone to accidents, which is otherwise a common process. Two people can therefore, bring in a 25 Tonne block from one end, process it, display it, and dispatch it on their own. Architecture has opted to campaign human life; by forcing better working conditions, physical and emotional well-being, creating comfort and thereby ensuring better communities and a richer built environment.

Prefabricated white metal flutters give the entire structure a buoyant profile, when looked at from afar. The stone buttresses make the building appear grounded at a more proximal viewing. The sides facing east and west are mostly blank, barring the small windows that connect the occupants with the surroundings. The windows also create a wind draft across the height of the shed expelled through the ventilators along the north light trusses therefore avoiding hot pockets at the top and effectively cooling the building by about 10-12 degrees. The building is designed such that the spaces are used judiciously, allowing for maximum possible green cover and soft scaping. Other sustainable measures include the use of bio STPs that recycle waste water and use it for landscaping and flushing toilets, 100% rainwater harvesting that keeps the groundwater table recharged and soft scraping inside that aids the creation of shaded areas to create a microclimate and keep overall temperatures of the facility low.

Representation: The Office
The design of the building revolves around the concept of mutually respecting the surroundings and nature. The built form is raised and sunk into the ground away from the existing row of trees on site, as a result being derived as linear in form. The entire building has been sunk and irregular shaped courtyards are created to avoid damaging the roots of the existing trees. Consequently, the built mass and the ground is punctured to create sunken courtyards and an amphitheater within the earth-cooled lower floor. Being partly underground, the eccentric mass defines a seamless silhouette adorned by screens in stone and greenery climbing up the entire roof in a sweep. The roof wraps around the ground, merging into the landscape to help the building remain cool, while ensuring physical access to the landscape above the roof.

The facade has the bearing of a rubble wall and the fluidity of the metal sheet, expressing the ageless and enduring nature of stone as a material. As an evolution from the primitive manner of construction, the buttress is used to hold the structure together, in a contemporary form. The facade is created with a double glazed structural glazing system along with insulated aluminum panels, and the repetitiveness of the grid makes the entire facade appear dynamic. The stone screen compliments the rubble façade showcasing how technology can help the same stone be used in an array of ways; as a buttress or as a floating element if engineered well. The wastage from the factory has been used for the stone slate that is fixed with SS rods and spacers; this becomes the shading device for the complete office facade. 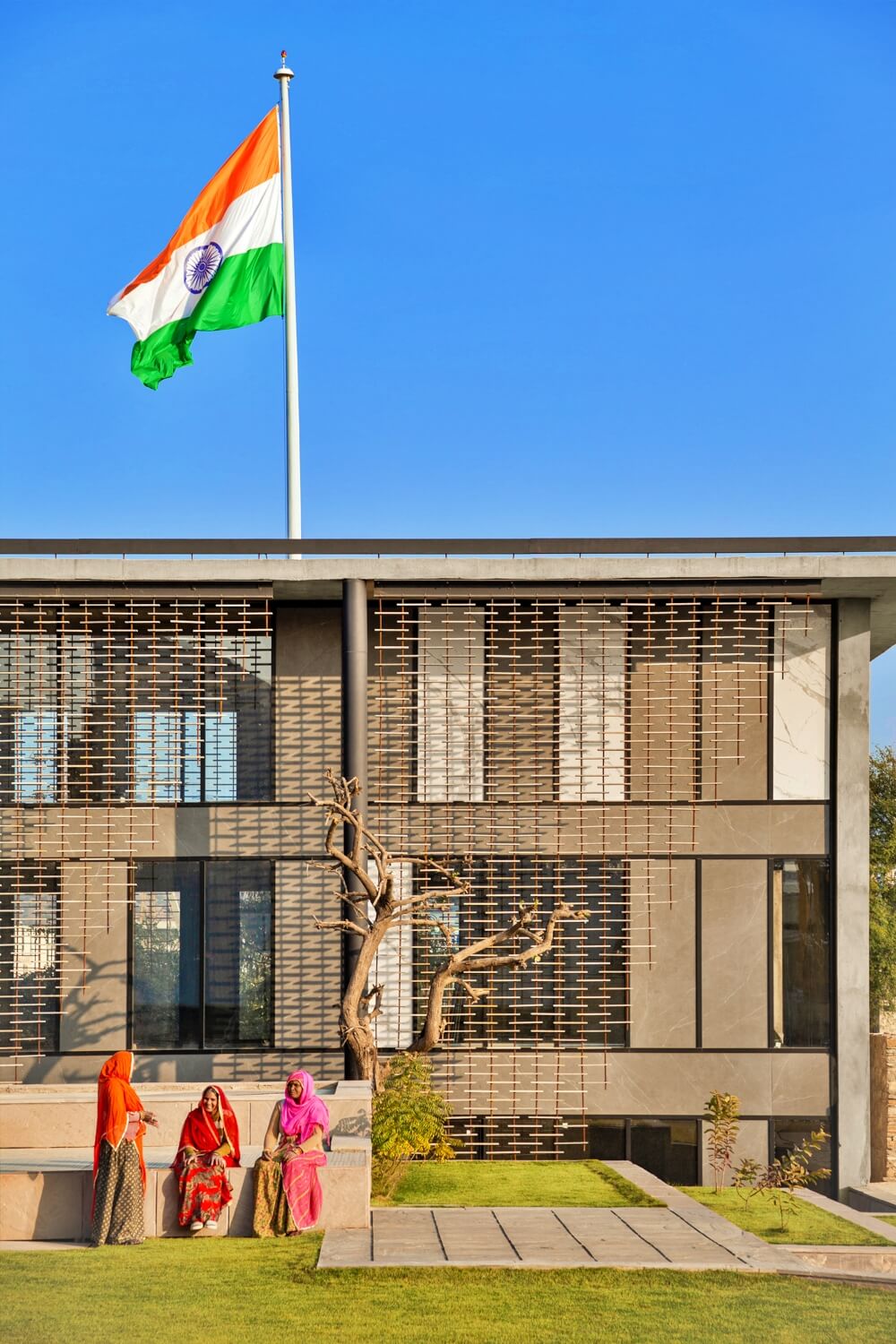 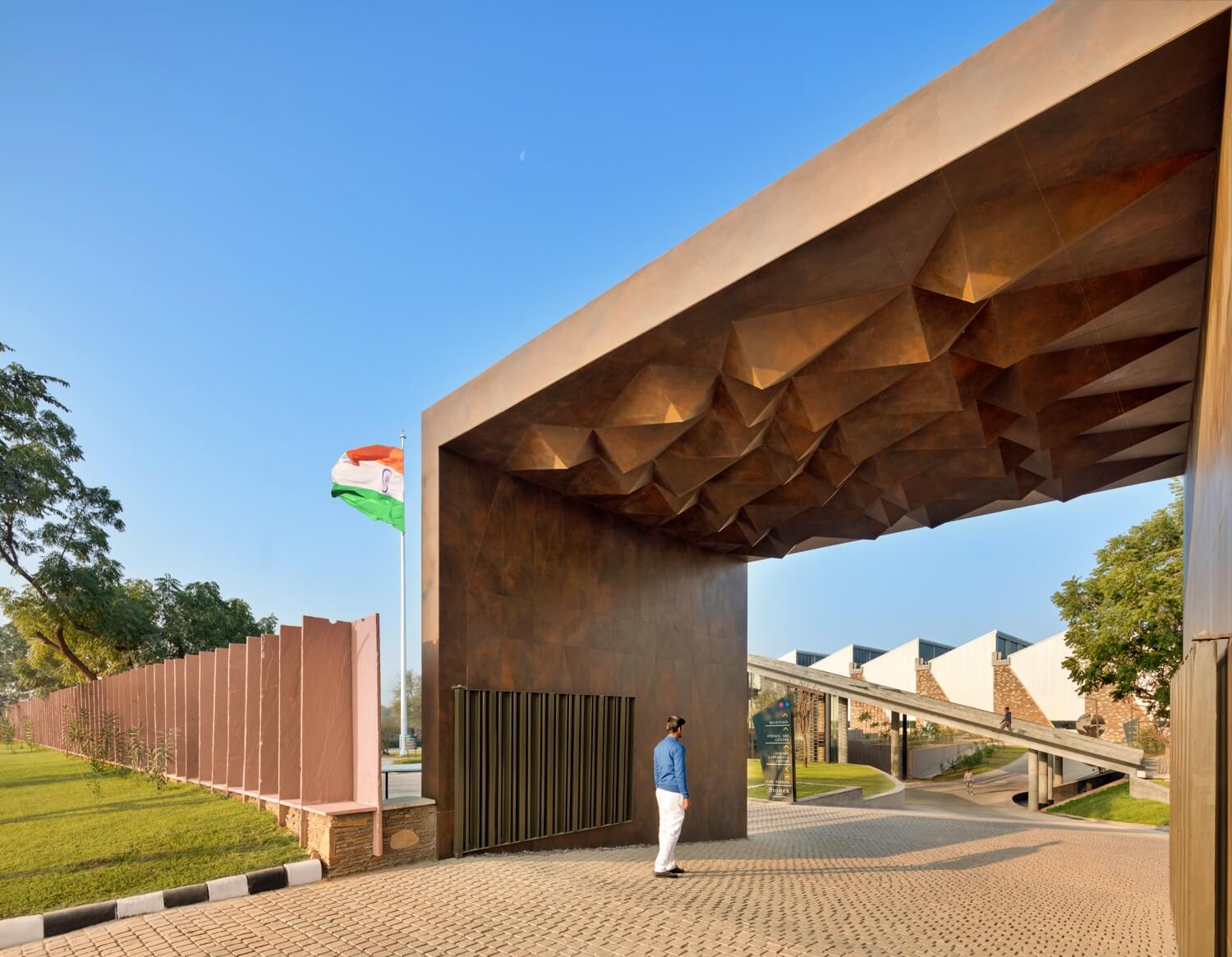 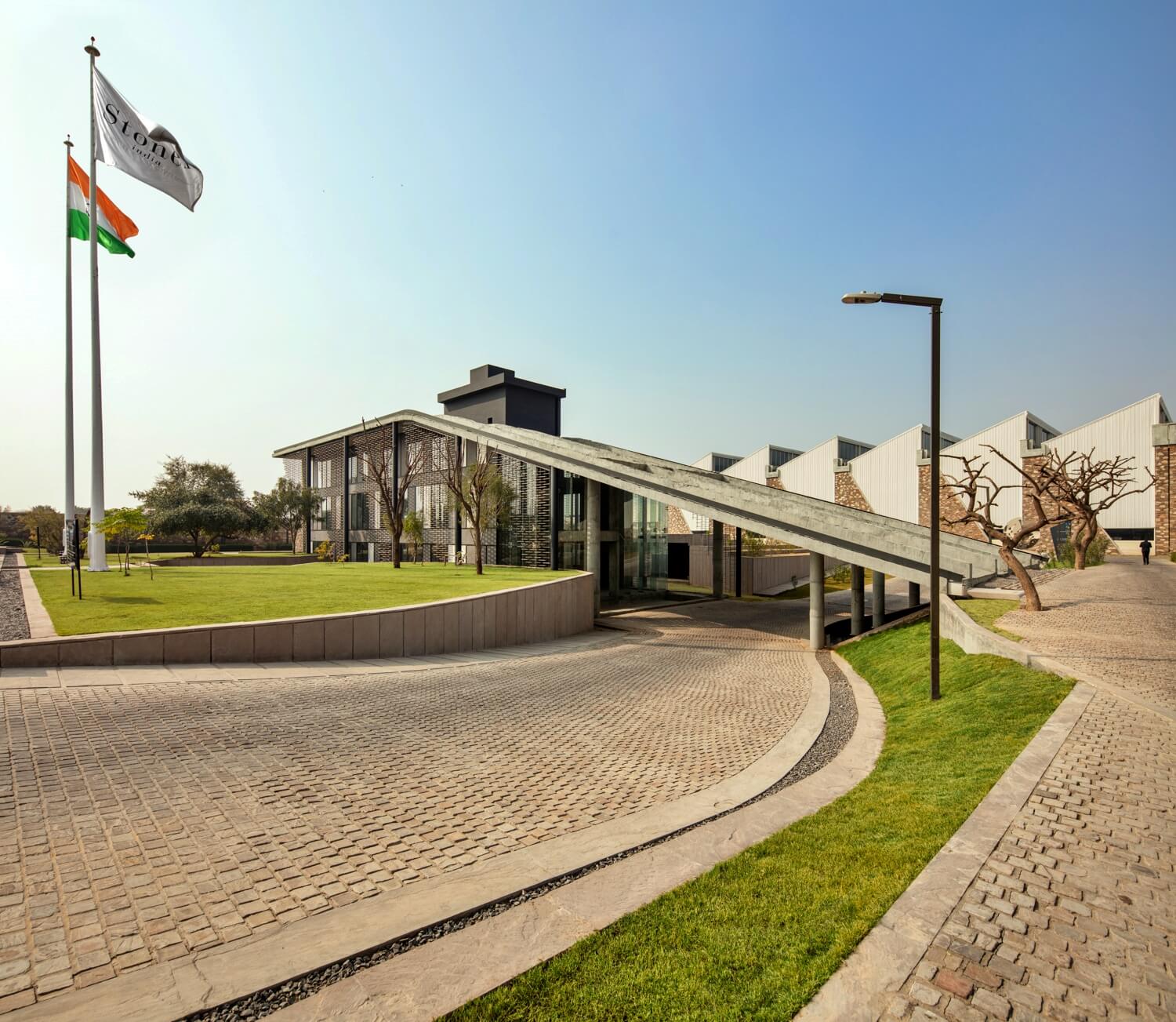 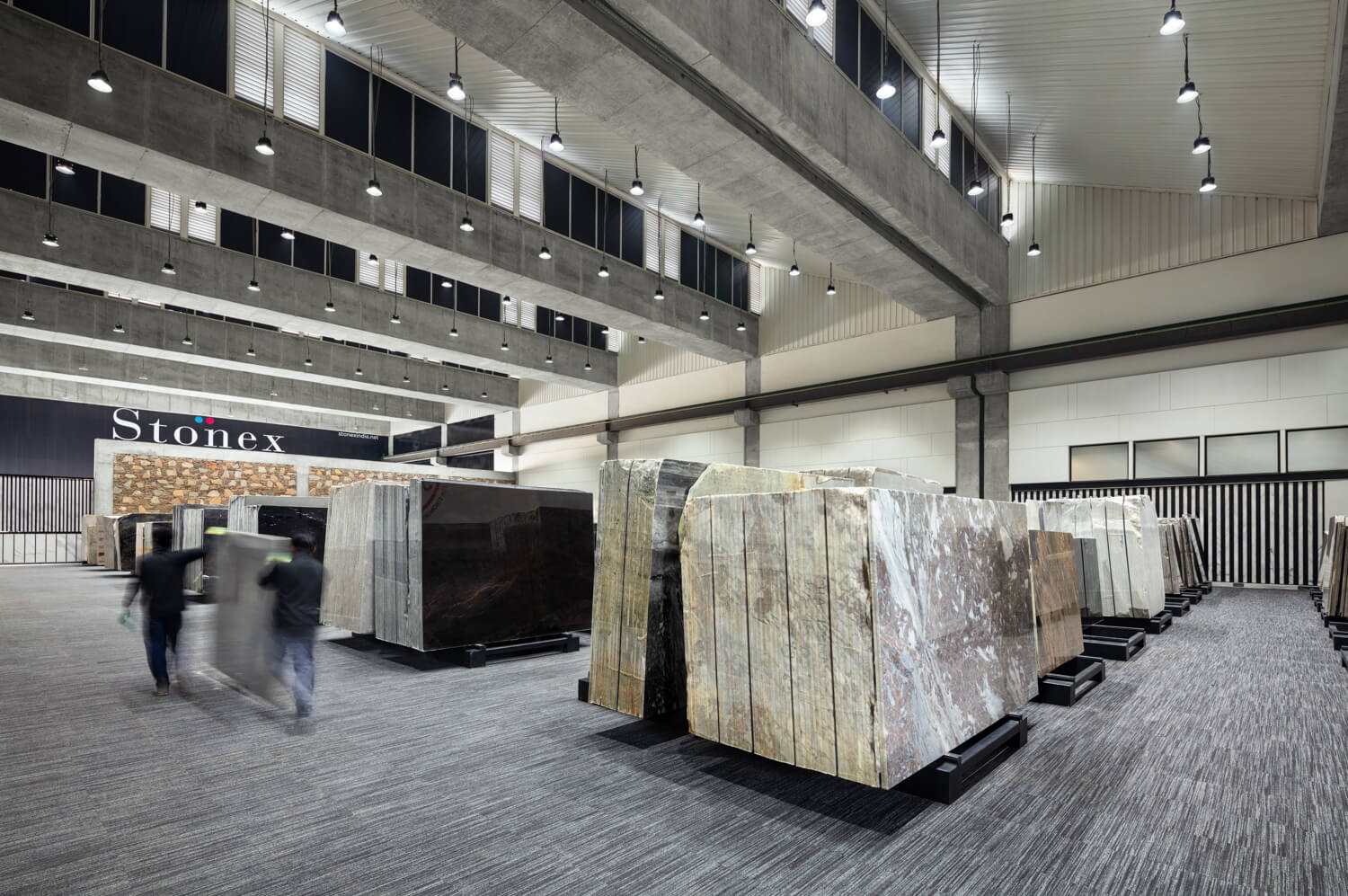 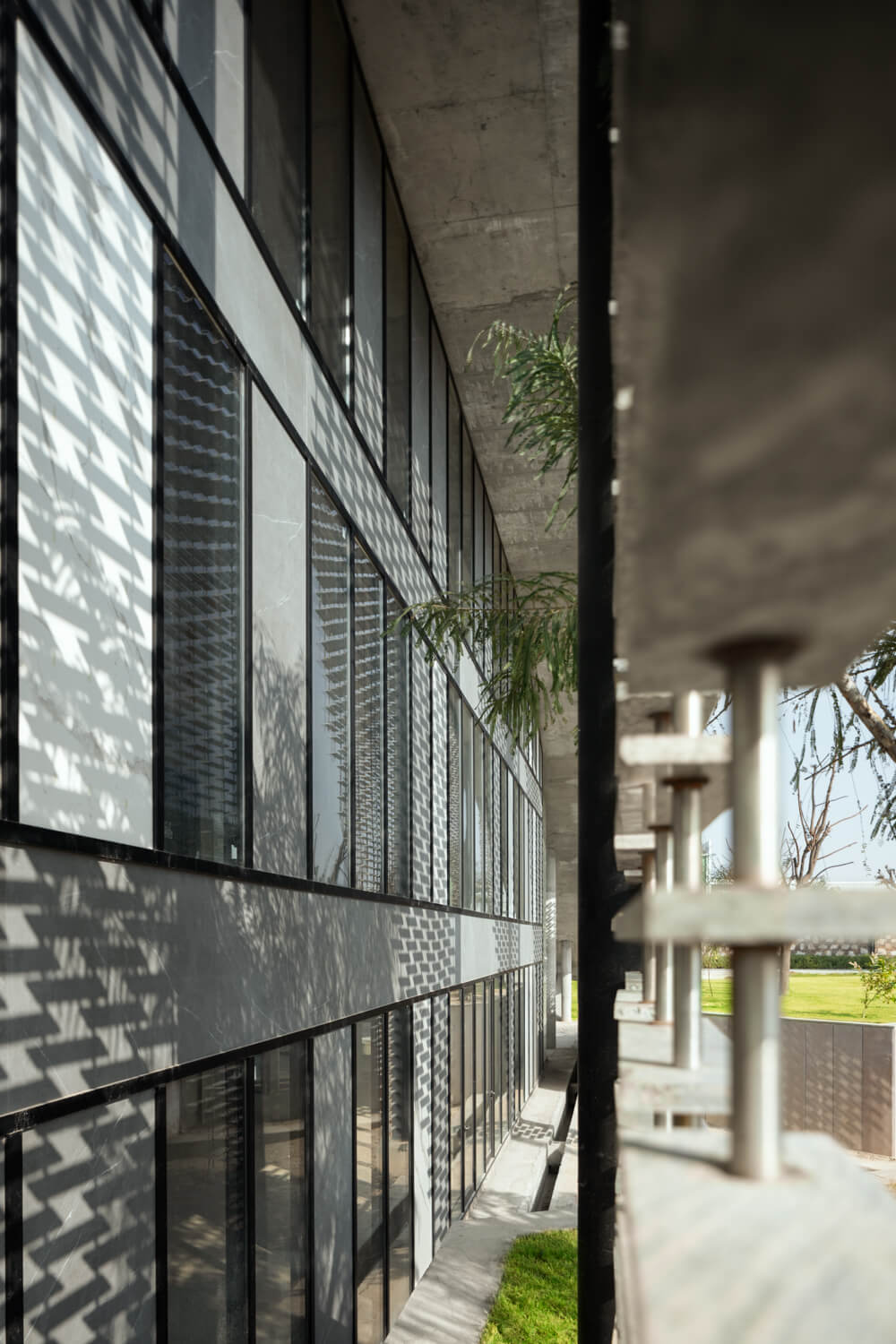 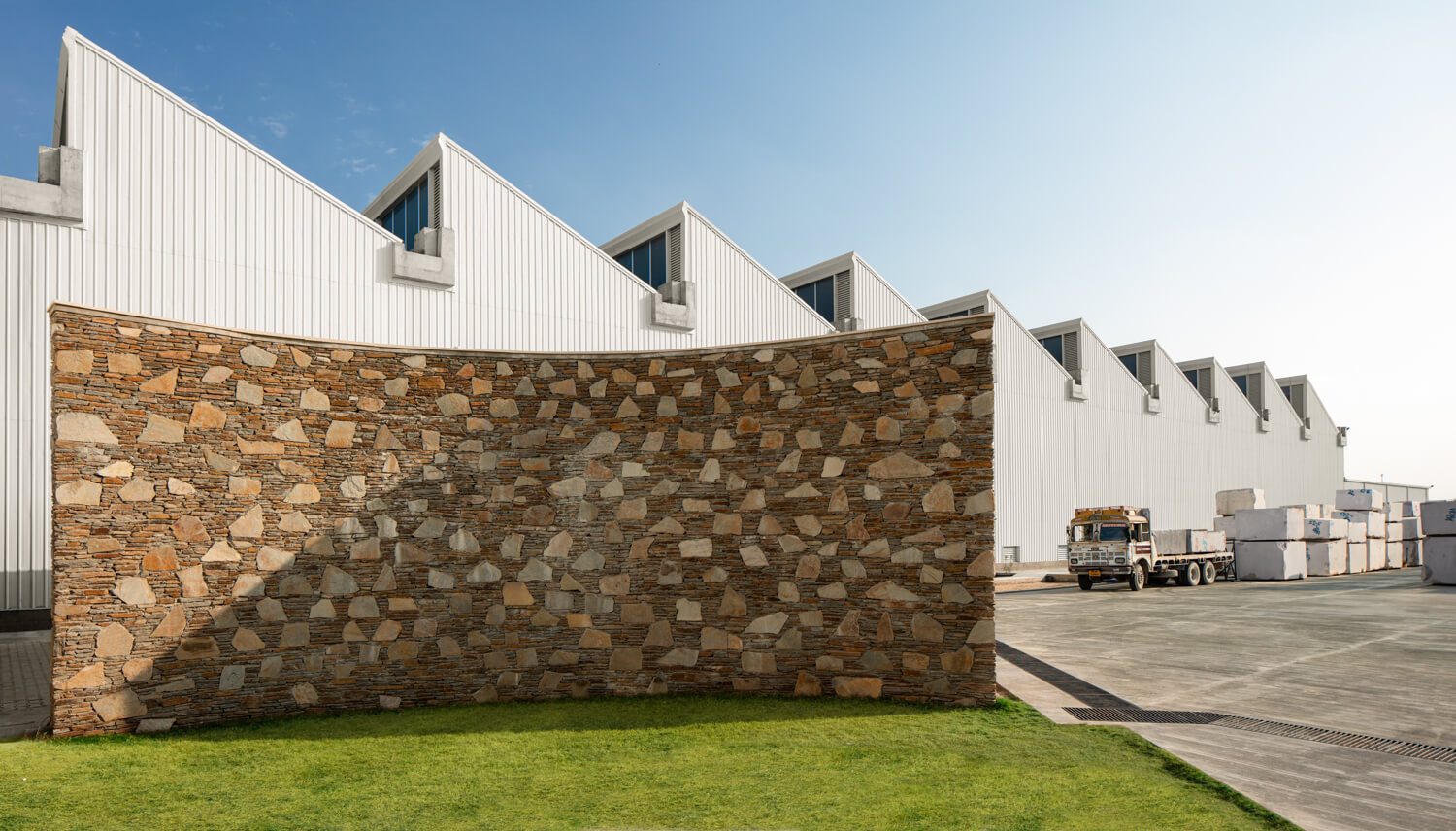 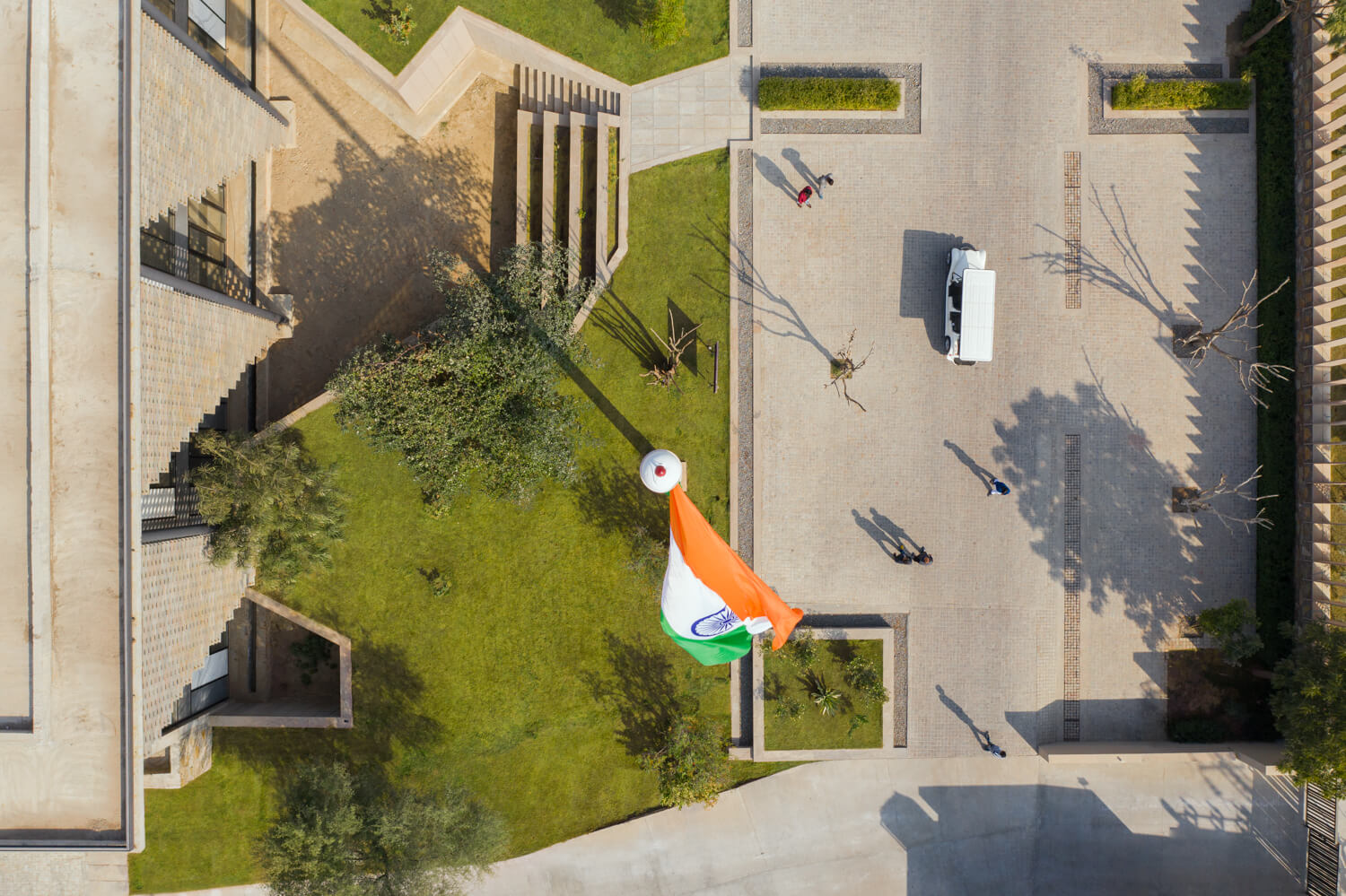