Stonex India’s administrative and industrial complex in Kishangarh has been conceptualized to serve as an eminent landmark in Kishangarh. Instead of erecting a factory-processed industrial shed that focuses on the product and does not communicate with the people who inhabit it, the Stonex factory is developed as a native production-house, geared for excellence and innovation of the global order, while successfully carving out a niche of its own amidst the industrial landscape.

The design of the building revolves around the concept of mutually respecting the surroundings and nature. The built form is raised and sunk into the ground away from the existing row of trees on site, as a result being derived as linear in form. The entire building has been sunk and irregular shaped courtyards are created to avoid damaging the roots of the existing trees. Consequently, the built mass and the ground is punctured to create sunken courtyards and an amphitheater within the earth-cooled lower floor. Being partly underground, the eccentric mass defines a seamless silhouette adorned by screens in stone and greenery climbing up the entire roof in a sweep. The roof wraps around the ground, merging into the landscape to help the building remain cool, while ensuring physical access to the landscape above the roof.

The facade has the bearing of a rubble wall and the fluidity of the metal sheet, expressing the ageless and enduring nature of stone as a material. As an evolution from the primitive manner of construction, the buttress is used to hold the structure together, in a contemporary form. The facade is created with a double glazed structural glazing system along with insulated aluminum panels, and the repetitiveness of the grid makes the entire facade appear dynamic. The stone screen compliments the rubble façade showcasing how technology can help the same stone be used in an array of ways; as a buttress or as a floating element if engineered well. The wastage from the factory has been used for the stone slate that is fixed with SS rods and spacers; this becomes the shading device for the complete office facade. 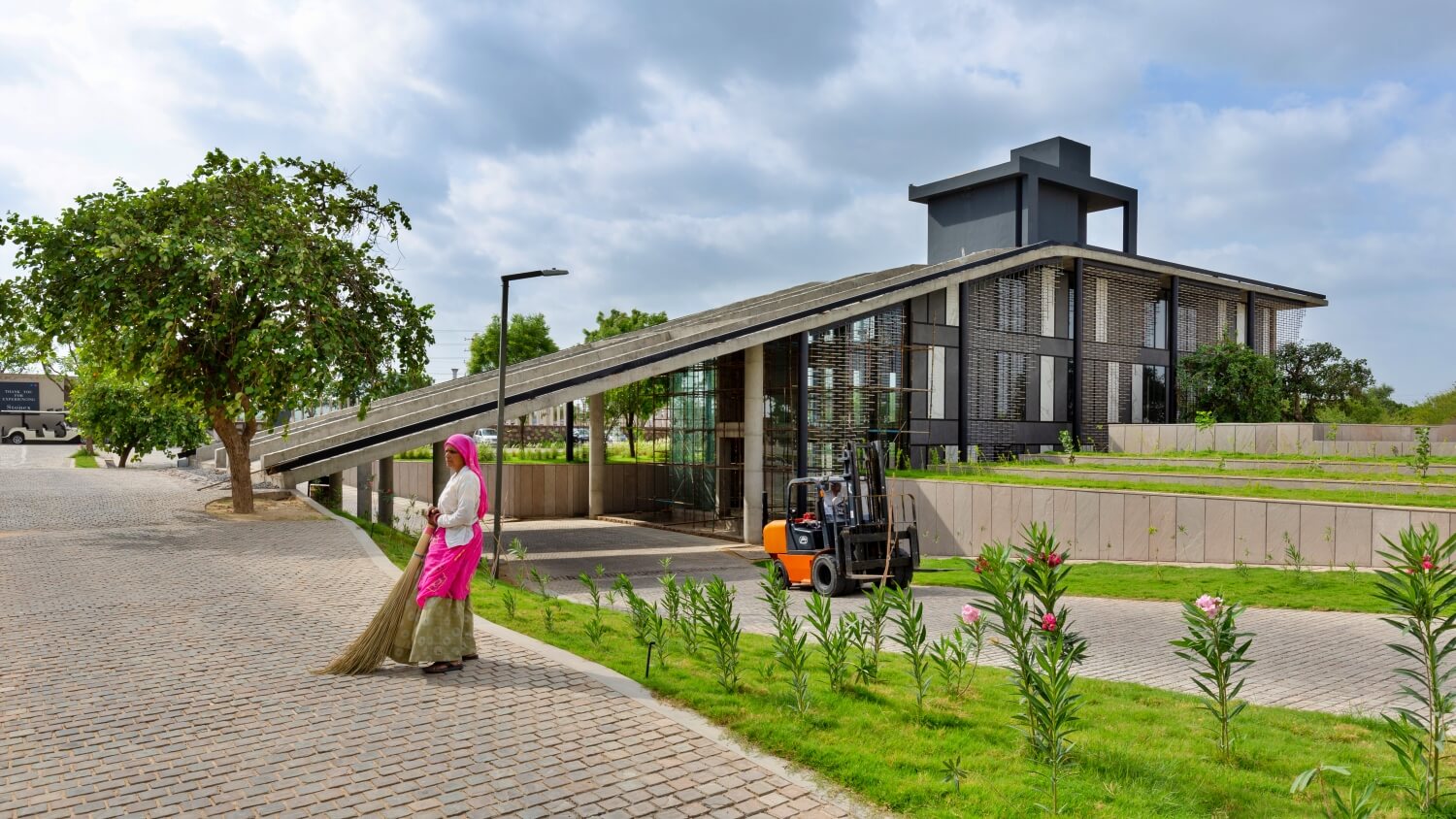 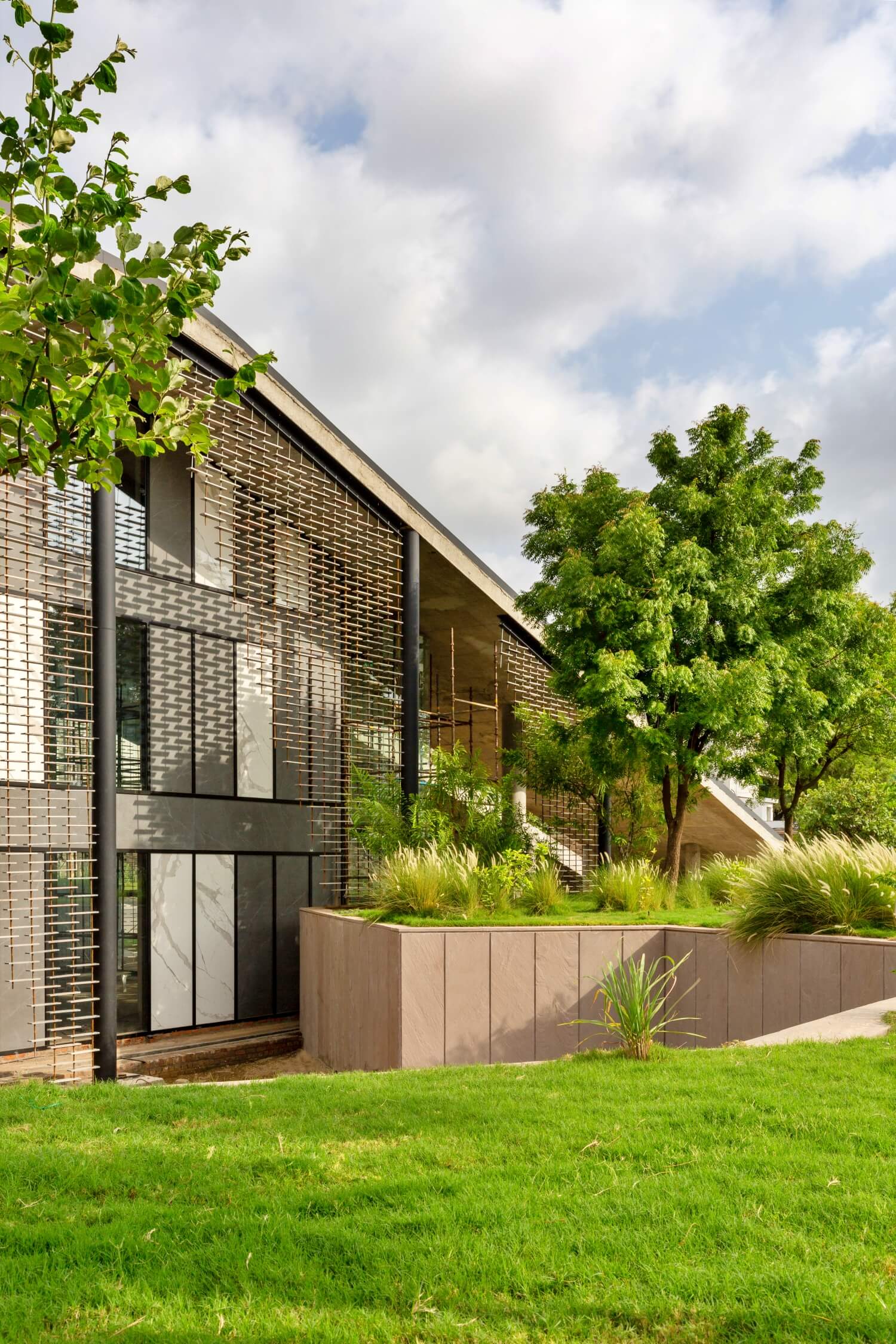 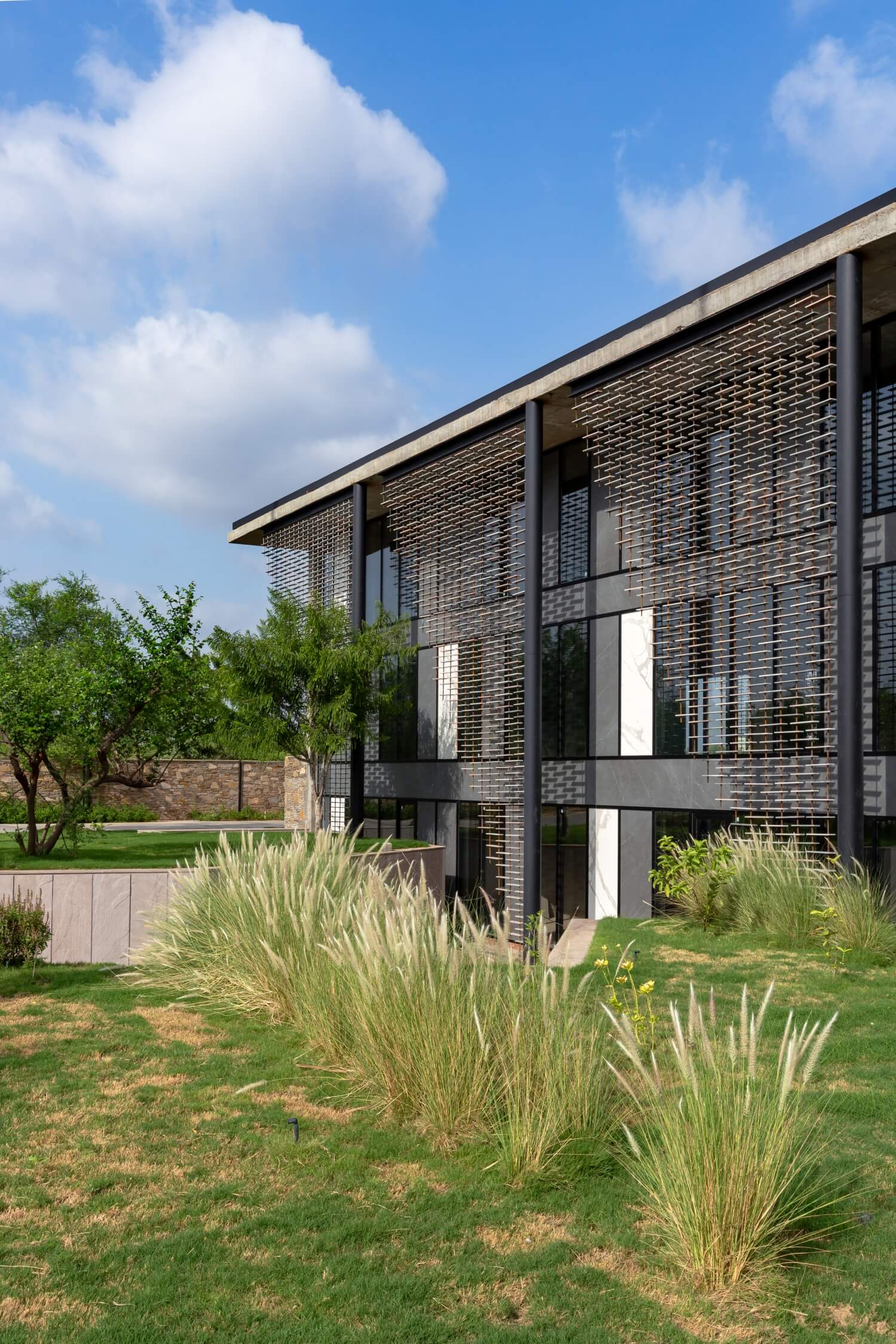 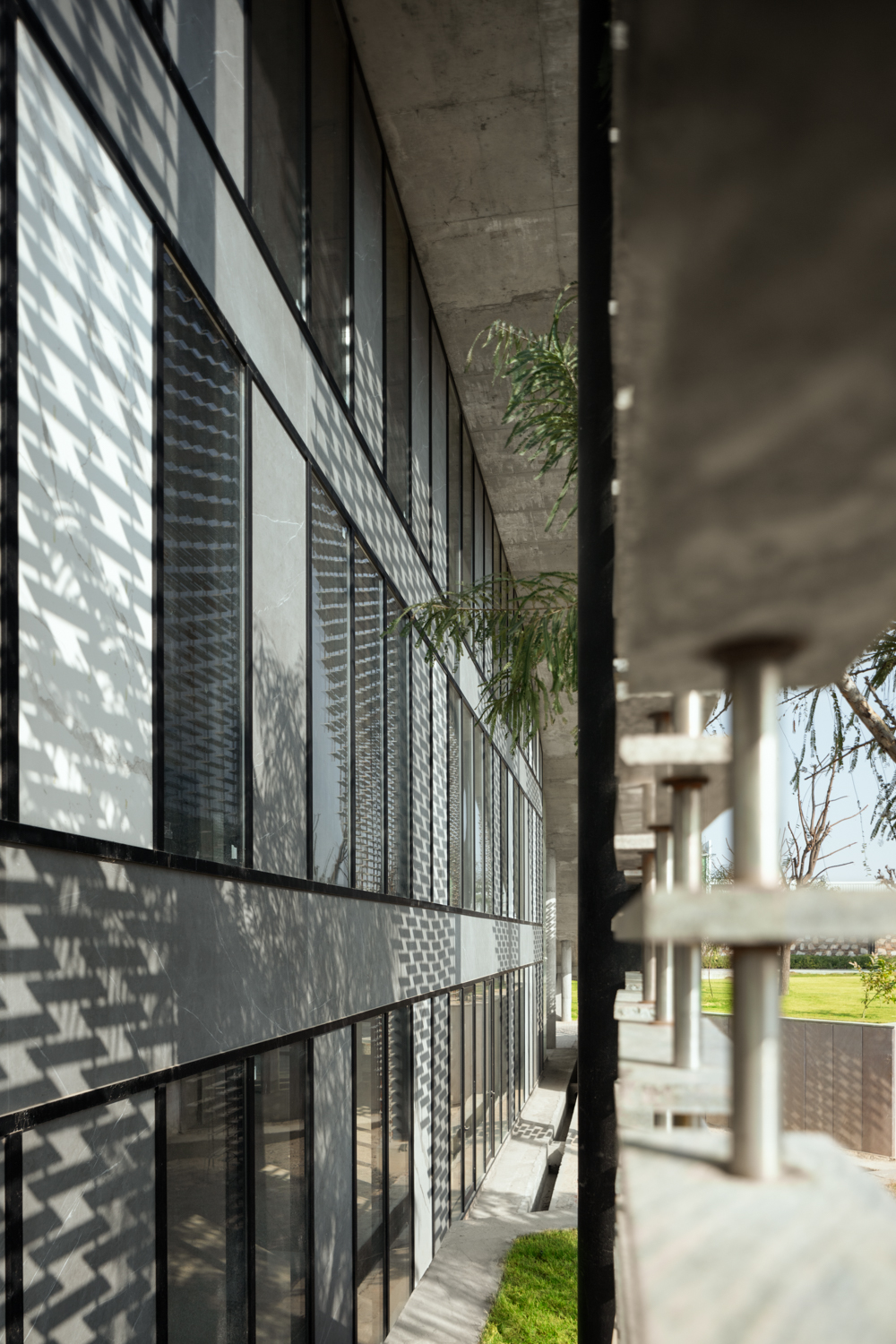 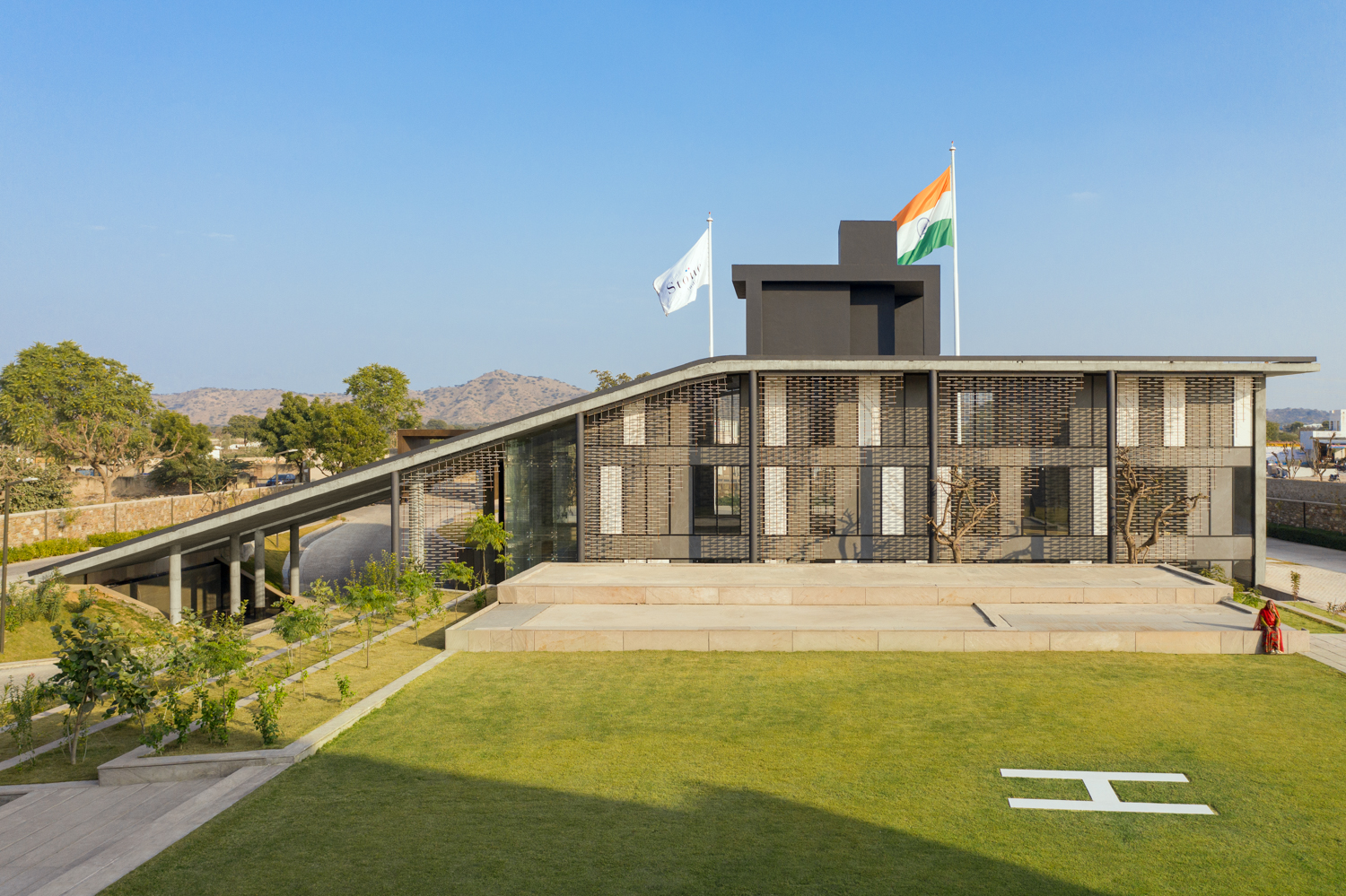